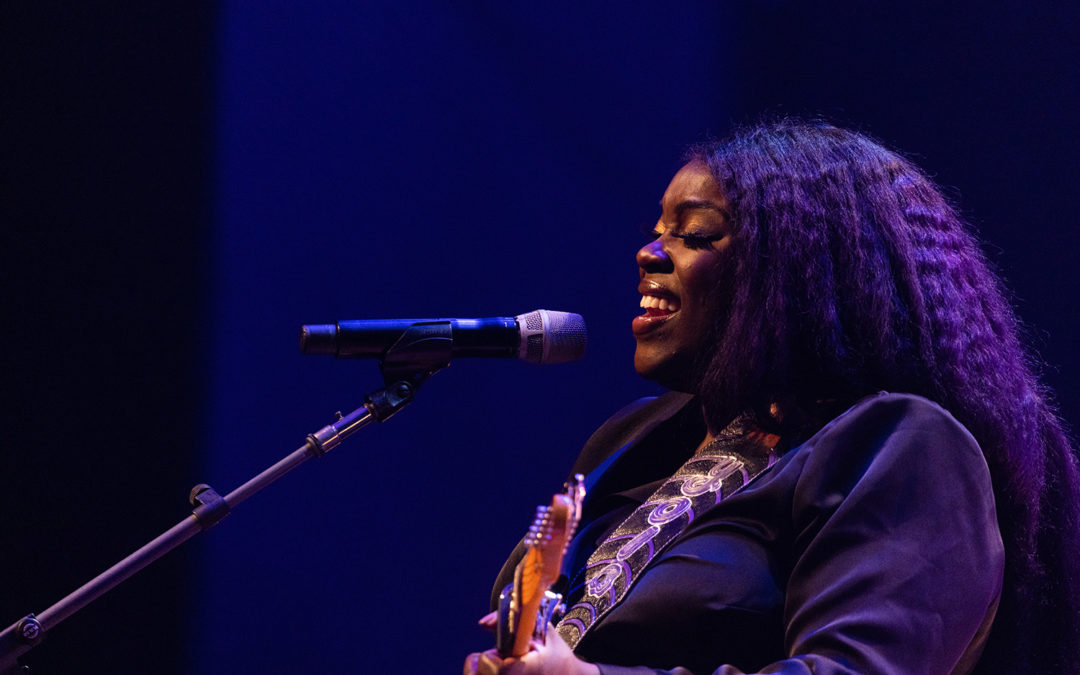 Yola, a six-time Grammy-nominated English singer-songwriter, performed Friday night at the Schaefer Center for the Performing Arts. The concert was a technicolor, powerhouse show. Her charismatic attitude and infectious voice had audience members roaring with enjoyment as they applauded Yola.

Throughout the show, Yola switched between multiple guitars, a tambourine and a music shaker. This, combined with soulful singing and attention grabbing raspiness had audience members brimming with joy as they cheered throughout the performance. It was clear Yola enjoyed performing as she danced along to her music

“The color changes were cool and the way they pulsed was cool,” said Gigi Upchurch, a senior elementary education major.  “Then I really liked when it was the yellow lights behind her, and then dark the rest of the stage so it made a frame around her.”

The lighting design of the show helped to emphasize the pace as well as engage the audience. For audience members, the flashing lights and booming music made the experience quite electric.

“In the program it said that she was genre bending, and that’s what it was.” said Lily Vowels, a senior geology major.

Yola performed covers of “Goodbye Yellow Brick Road” by Elton John and “Day Dreaming” by Aretha Franklin with “a symphonic soul, mellifluous pop melody, disco groove, rootsy and ecstatic gospel twist.” Every song that was performed flowed into one another, which was executed by the quick transition of instruments and rhythms of the incoming song.

The continuous flow of the set list had audience members moving along and taking in the moment. The show ended with the entire audience up on their feet and dancing to the encore, cheering and celebrating Yola.

“I also hope at the end of the concert they feel absolutely elated and energized by the talent and the message and the sense of experiencing Yola here with the Boone community.” said Allison West, director of marketing and public relations for the Schaefer Center.

Yola received two standing ovations from the audience, mixed with newcomers and fans, which was filled with dancing, singing and excitement to end the night off.