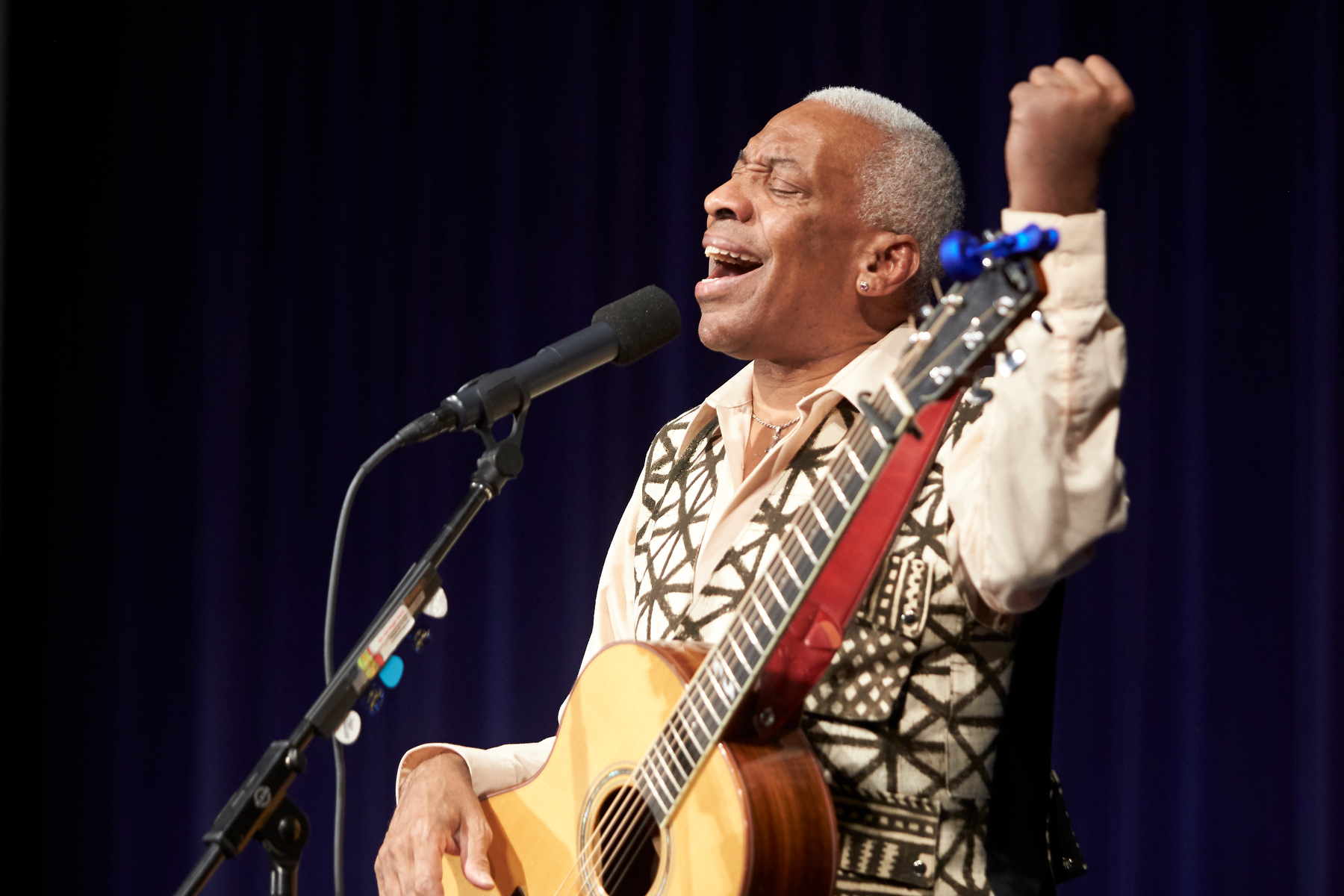 The Underground Railroad is one of the most important chapters in American History. This engaging concert of songs, stories and narratives about slavery and the quest for freedom reveals the hope, power and eventually, the triumph that was accomplished by a network of multicultural allies. Music and the Underground Railroad provides an understanding of the secrets and passion of this powerful era and an understanding of the use of song to communicate information during this time in American history.

Events is FREE, but registration is required.

REGISTER FOR EVENT HERE
IN-PERSON EDUCATOR WORKSHOP
JANUARY 19, 2022 at 4pm (90 min)
Live workshop at the Turchin Center for the Visual Arts
Click HERE for more information.
Thanks to the generous support of sponsors, The Schaefer Center Presents is able to offer the 2021-22 series free of charge. To help us continue our mission of offering essential high-quality arts programming to university students, faculty/staff, and the community, please consider making a gift of any amount.
GIVE NOW

Reggie Harris is a musician, storyteller and educator who has been a vibrant force in musical, educational and historical circles for over 35 years. Steeped in the tradition of African American spirituals, folk, gospel, rock, and the music of civil and human rights, Reggie has amassed an amazing repertoire of African American music, blending spirituals and freedom songs, the old with the new. A songwriter of great depth and passion, Reggie’s songs reveal thoughts about life and love and some of the deep aspects of the human experience, covering topics from his own personal journey to world issues and history.

Reggie Harris has been affiliated with the John F. Kennedy Center’s Partners in Education program for over two decades, offering both multimedia performances for students and communities as well as an in-depth workshop for educators at all grade levels. As a founding artist in the John F. Kennedy Center’s Changing Education Through the Arts program, Reggie is a committed teacher and advocate for lifelong learning.

Reggie currently serves as a musical education director and is a board member of the Unitarian Universalist Living Legacy Project. The Living Legacy Project is an organization committed to increasing the knowledge of the modern civil rights movement and works to pass on relevant lessons in keeping with the present day struggle for human rights.

Reggie continues to write, tour and record new music in a career dedicated to the mission of education, inspiration and justice. 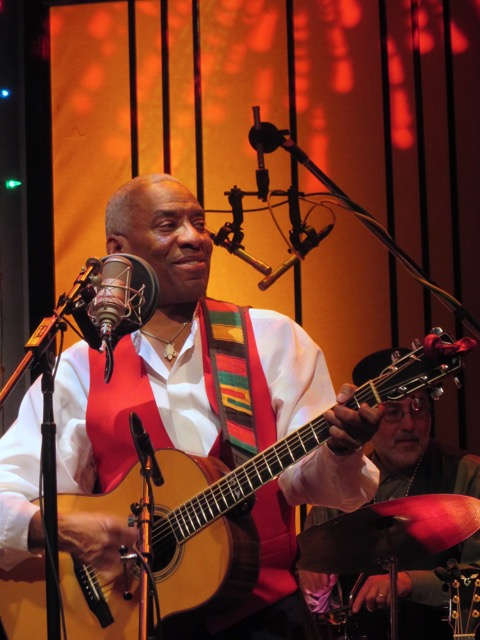 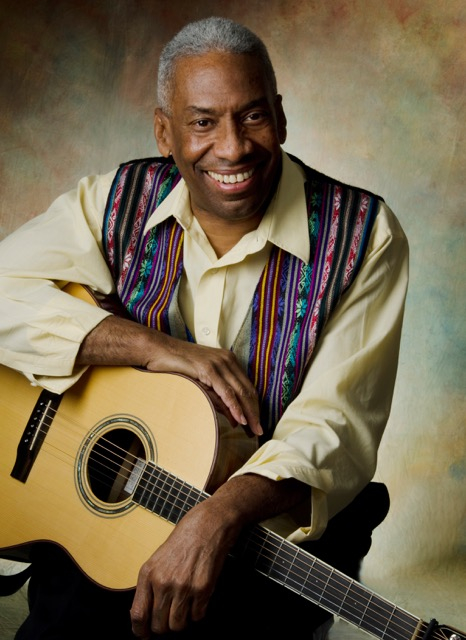 “Reggie’s time was a strong way to end the season. It was great to see the connections in the student audiences and with the public concert attendees. They couldn’t get enough of Reggie and came up to him to visit for a looooong time! ” —Margot Day, Performing Arts Director, Quad City Arts, Rock Island, IL

“Defiance Middle School’s staff and students had the privilege to begin Black History Month this year with a performance by Mr. Reggie Harris. Mr. Harris utilized song, music, and his knowledge of the Underground Railroad to create an entertaining, interesting storytelling atmosphere for his audience. Students were engaged throughout the performance and encouraged to sing along at various times during the assembly. Ultimately, it can be very difficult to convey a message to a middle school audience. Mr. Harris had his audience’s full attention during the entire performance. Any school or organization would benefit from a visit from Mr. Harris.” —8th Grade American History Teacher,  Defiance, OH

“I had no idea that the Black Lives Matter movement would open new dialogues or that the vast majority of our students would still be learning remotely during this difficult year. I was also unsure how a virtual program would resinate or what impact it would be able to produce. After your “How Martin Climbed the Mountain” program, I think the only question for anyone is ‘How can we not afford to fund programs such as this?”  I was told during planning that the seventh grade would find about 17 students to provide questions and meet for the Q and A. This would be held during “Encore,” a free time in the morning prior to classwork beginning. However, after all students had the chance to view your performance, not 17, but 300 students, mostly virtually with watch parties set up for those students viewing from within our school building, logged on. Three hundred middle school students volunteered their early morning free time to hear what you had to say. And what you had to say was exactly what we all needed to hear. ” —Cultural Arts Rep, Wake County Schools, NC

“Reggie Harris is a passionate, engaging, social change musician. He’s a teacher, storyteller, musician, songwriter, and activist. Reggie is the consummate entertainer, but music means so much more to him than entertainment. Whether he’s performing songs of liberation from the days of slavery, songs from the civil rights movement, or his own compositions, Reggie’s on a mission to bring positive change to the world — his voice and his guitar are merely tools — tools he applies exceptionally well.” —LGBTQ and Multicultural Education Consultant, Richmond, VA

“Dear Mr. Fiedler (Retired history teacher volunteer), I must say how much I enjoyed the program today on the Underground Railroad. It was very powerful, and I know how unique of an experience it was. Not many people my age have the opportunity to say they have seen a program anything like that. So, I feel the need to thank you for taking the initiative for making this happen. It was very touching, and I was also very glad to see you there today. I hope you are having a good week, and if you think of it, please pass my message on.Thank you! —Student, Central Columbia Middle School, Class of 2021