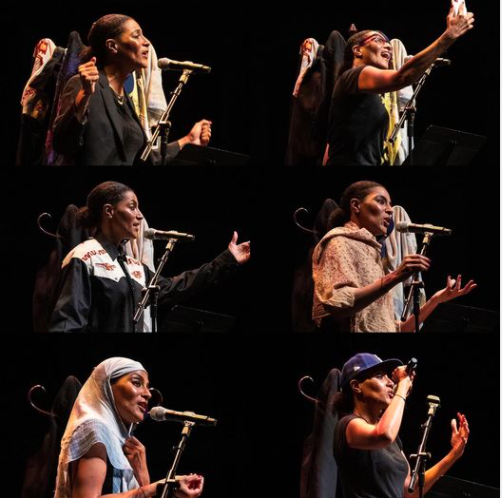 The Many, Many Roles of Sarah Jones at ASU’s Schaefer Center for the Performing Arts

At Appalachian State University’s Schaefer Center for the Performing Arts and live-streamed, An Evening with Sarah Jones showcased the raw talent and poignant messages of Tony Award®-winning Sarah Jones‘ multi-character, one-woman shows – and what an evening it was!

Sarah Jones is an American performer, writer, comedian, and activist identified as “a master of the genre” by The New York Times. Jones is known for her Broadway hit Bridge & Tunnel, originally produced by Oscar®-winner Meryl Streep, and her critically-acclaimed 2016 stage production of Sell/Buy/Date, which is currently being developed into a documentary and will mark Jones’ directorial debut. With multiple mainstage TED Talks that have garnered millions of views, performances for President and First Lady Obama, and historic performances worldwide as a UNICEF Goodwill Ambassador, Jones mirrors her onstage, multi-character technique in real-life by assuming just as many roles offstage as on.

Originally slated to perform at An Appalachian Summer Festival in July of 2021, the actress’ rescheduled performance surely delighted the audience’s pent-up anticipation and demonstrated the premise of her national acclaim. Due to the ongoing COVID-19 pandemic, this was Jones’ first live show in two years, so she, too, felt the anticipation and expressed excitement to be back in the theater and welcome her characters to the stage! Introduced by Bonnie and Jamie Schaefer as a personal friend, Jones walked on stage and immediately thanked the audience for getting her out of her house amid the pandemic.

To start the hourlong show, Jones explained that all her characters are inspired by real-life individuals, and varying from an elderly Jewish woman to an indigenous Native American man to an overly enthusiastic female college student, they make up quite the diverse bunch! As Jones inhabited each of the nine characters that made an appearance, new accessories and all, she expressed their assorted, distinct perspectives and offered to the audience different approaches to, advice on, and views of social justice issues. Her crafty comedy and local humor, which was wisely woven into her performance, added comedic relief that the audience grasped onto as they considered the delicate topics of prejudice, race, and ignorance. The performer invited the spectators to consider the hard questions circulating in our society today, such as “Is it possible to right all the wrongs of the past?” and “Who am I within the realm of activism?”

Her characters made suggestions on how to improve human-to-human interaction both nationally and globally. Many of their messages struck deep as the audience applauded at the conclusion of each. The female Dominican American character presented the act of giving the benefit of the doubt, for when someone has an accent and therefore does not sound like you, “their heart beats same as yours.” The male indigenous Native American character suggested the way to heal America is to look at its origins, and through him, Jones acknowledged the native land on which Appalachian State University’s campus, including the Schaefer Center for the Performing Arts, is built. Her Raleigh, North Carolina-raised character, Ms. Lady, made an appearance – her first in ten years – to remind that much racism, particularly slavery, is of the immediate past and those affected as well as their descendant relatives still “carry it in their body,” they are still affected by it. An overall message of all the characters, including these three and Jones herself, was to approach the justice issues present today, and our connection to them, with love.

The stories told by Jones’ characters were meant to make the audience feel uncomfortable; this discomfort demonstrated her assertion that, “We are inextricably linked to everyone else.” No matter one’s race, religion, gender, or sexual orientation, everyone can find one of Jones’ characters to relate to, and for those who seem more distant, we can listen and grow. Such was the theme of the evening: asking ourselves and others the hard questions, for if we do not, how will we evade repeating history?

The audience was actively engaged throughout the entire performance. Jones’ characters even included local observations by commenting on the incessant rain witnessed in Boone all week, referencing the town’s 97% White population, and, as the elderly female Jewish character, asking if there is a synagogue in town. To conclude the evening, Jones invited members of the audience to ask her questions to which she responded in character or as herself. The audience was so eager and bursting with questions that Jones ran out of time trying to answer them all. Her advice to the students in the audience aspiring to be professional performers was to embrace vulnerability and find those with which you feel supported: “Vulnerability is the new strength!”

With her stock of social commentary, witty comedy, and her captivating manner of inhabiting her characters’ personalities, voices, and gestures alike, Jones expertly explored the hard questions and guided the audience to think critically about our society and social justice. Her work beautifully displayed the power that theatre holds, especially when utilized to combine entertainment with activism.